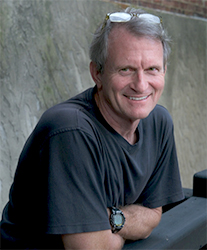 His works have been commissioned by the U.S. Postal Service, Coca-Cola, Delta and United Airlines, Canon USA, Time-Life, and Radisson Hotels Worldwide, among many others. Tate’s paintings and prints are held in private and public collections worldwide and have appeared in numerous national publications.  A former freelance illustrator and featured artist for the 2000 and 2010 Piccolo Spoleto Festival in Charleston, SC, Tate has also illustrated more than a dozen books, served as Illustrator-in-Residence for the Gibbes Museum of Art in Charleston, and has been awarded many honors for his fine art paintings and illustrations. Two of his original works have been exhibited in the Society of Illustrators' Museum of American Illustration in New York City.

Raised in Kentucky and upstate New York, Tate received his BFA from Western Kentucky University, where he was a collegiate swimmer.

The father of two daughters, Tate lives and paints in Charleston, SC.

When you're in Charleston, please visit my gallery 257 King Street (between Wentworth & Beaufain Streets; directly across the street from Victoria's Secret & Anthropologie). I don't keep regular set hours there, so you'll catch me there best of all by appointment (gladly! 843-568-9911) or by chance.